Here’s how Ollie got lean and achieved a beach body in 16 weeks. This is an accountant of Ollie’s transformation in his own words…

Why did you want to get lean for your holiday?

Social media, magazines and movies have had a profound effect on my image of the male physique. I’ve always admired the ‘beach body physique’ even before stepping into a gym. Wanting to achieve this physique is what subsequently led me to signing up with Nick at LEP Fitness back in April 2014.

As timed moved on and I became more educated, and the challenge began to appeal to me more than anything. I knew before undertaking a ‘cutting’ phase that the discipline needed would push me to my limits, both mentally and physically.

What did you want to achieve results wise?

Over time I gained more understanding about my body type and genetic potential, and as a result I surrounded myself with public figures with similar body types to use as my ‘gymspiration’. Instead of looking to Arnold Schwarzenegger’s of the world, I began to look at John Chapman (The Lean Machines) and David Laid (Gymshark Athelete & YouTuber).

I’m a 6ft 4 ‘hard gainer’ which comes with it’s advantages, and challenges. But as soon as I focused my mind on achievable physiques for my body type, my vision became clearer and allowed me to set realistic goals.

What type of training did you do to get these results?

The phase was roughly set out to last 16 weeks, giving enough time to drop body fat slowly and maintain the maximum amount of muscle mass. Initially I started on weight sessions split into upper and lower body sessions, slowly adding in a combination of HIIT and LISS cardio which was increased on the weeks when plateaus were hit to maintain weight loss.

Nick helped me understand that when dieting it’s all about balance between calorie deficit and increasing your exercise output. As well as this we introduced glycogen depletion workouts which are absolutely killer and were 100% the hardest workouts of the phase.

What type of food did you eat to get lean?

The majority of the time I followed IIFYM (If It Fits Your Macros) for my nutrition. I was disciplined enough to allow this to work for me, and could work in and few ‘cheat meals’ here and there. But when the time came to really slim down in the last 6-8 weeks, I chose to go to a strict nutrition plan that was regimented with every meal planned at least a week in advance. This involved eating the following foods for example…

What’s been the hardest part of prep and how have you overcome the challenges you’ve faced?

Physically and mentally there are different challenges. With regards to food, it’s great to lock in and really focus during the last few weeks of your prep, but knowing your body is key.

Be aware when you mentally feel drained and tired that having someone to talk to like Nick is worth it’s weight in gold. You’ll look in the mirror one day and feel deflated that nothing seems to be working. It’s times like this you have to be persistent, listen to Nick, and hone in completely.

Workouts are absolutely killer, especially when you have nothing in tank. You have to come to the realisation that you’re not going to be able to lift your heaviest during prep. Your goals are different at that moment, so focus on them instead of your ego.

What have you learned about your body during this process?

Personally I have a tendency to become quite inflamed reasonably quickly if I eat the wrong things. This can normally be due to over indulging or not drinking enough water. The trick is to not get down in the dumps, it’s about how you recover. For myself I found that a period of fasting around 12-24hrs depending on the severity of my inflammation, while drinking plenty of water, normally restored my body to working order.

The most important thing is to remember that it’s not the end of the world. For example, if you are eating 7 meals a day, that’s 49 meals a week. Imagine you’re Lionel Messi in a training session shooting at goal, hitting 46 out of 49 balls on target, that’s a great average. So don’t worry if 2/3 sneaky meals creep in to your prep. The majority will always outweigh the minority.

What advice would you give to someone who’s looking to get lean?

Be aware it’s not a walk in the park, and requires serious consideration, motivation, and discipline. It would be too easy to sit here and say ‘hey, get lean in 8 weeks, it’s a doddle, everyone should be do it’ when the reality is completely different.

The days that matter are when you’ve had a bad day, maybe because of work or a situation that’s happened, and you end up reaching for the snack jar and beating yourself up. Learn to bounce back, these are the money making days that separate the ‘men from the boys’ (or the ‘women from the girls’).

I hope you’ve found this blog helpful. If you have any questions please feel free to contact me on any of the below social media links. 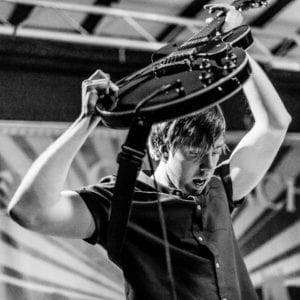